In the United States, Black and African Americans are at a much higher risk of HIV than other racial/ethnic groups. Many people have hypothesized that this health disparity, or difference, is driven by stigma. Drs. Earnshaw, Bogart, Dovidio and Williams proposed the Stigma and HIV Disparities Model to explain how stigma associated with race and ethnicity leads to racial/ethnic HIV disparities. 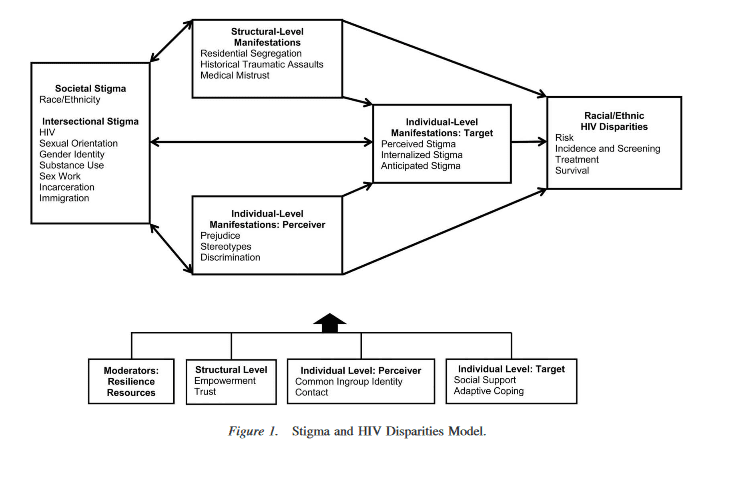 This model starts with societal stigma associated with race/ethnicity. This is social devaluation and discrediting that Black and African Americans experience in the United States. The model also highlights that Black and African Americans may live with intersectional stigma, or other characteristics that are also socially devalued and discredited such as HIV, minority sexual orientation, minority gender identity, substance use or misuse, sex work, incarceration, immigration, and possibly others. This social stigma is then manifested, or expressed, at the structural and individual levels. At the structural level stigma is manifested in policies, such as laws enforcing racial residential segregation. At the individual level, stigma is manifested among perceivers who may believe stereotypes about, feel prejudice toward, or discriminate against Black and African Americans. Stigma is also manifested among targets who may experience stigma from others in the past or present, expect to experience stigma from others in the future, or internalize stigma by stigmatizing oneself or one’s group. The model suggests that these three manifestations of stigma ultimately lead to HIV disparities. The authors also acknowledge that social context (not a part of this model) is a factor that can affect how stigma is experienced as well.

How does stigma contribute to racial/ethnic HIV disparities?

First, stigma increases risk of HIV. At the structural level, racial/ethnic minorities are more susceptible to incarceration due to racial stigma and people who are incarcerated are at high risk of HIV due to syringe sharing and condomless sex. At the individual level, people who internalize racism tare at a greater risk for substance use disorders, which in turn can lead to risky sexual circumstances.

Second, stigma undermines HIV testing. Racial and ethnic minorities are more likely to live in places where they have a greater risk of being exposed to HIV, yet they often also have limited access to forms of prevention, testing, and treatment. People also fear the stigma that they may face if they test positive for HIV, and so don’t get tested for HIV.

Fourth, stigma shortens people’s lives. Many racial/ethnic minorities are subjected to stress from stigma through their entire lives. Higher levels of stress can lead to quicker development of AIDS and lower survival rates among Black and African Americans. A person living with HIV who is exposed to racial or ethnic stigma is at increased risk of depression, anxiety, heart problems, substance use, and other health problems that could lead to an earlier death.

How can people be resilient to stigma?

People are currently developing and testing interventions to eliminate racial/ethnic, HIV, and other forms of stigma. But, stigma has proven quite difficult to eliminate. As we try to end stigma, there may be ways to help people be resilient to stigma so that it doesn’t harm their health.

It is important for clinical psychologists and other healthcare professionals to understand the role of stigma in HIV disparities, work on eliminating social stigma associated with race and other intersectional stigmas, and strengthen resilience among people at risk of or living with HIV to promote health equity.

Drug Addiction Stigma in the Context of Methadone Maintenance Therapy: An Investigation...
Scroll to top