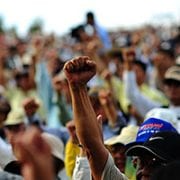 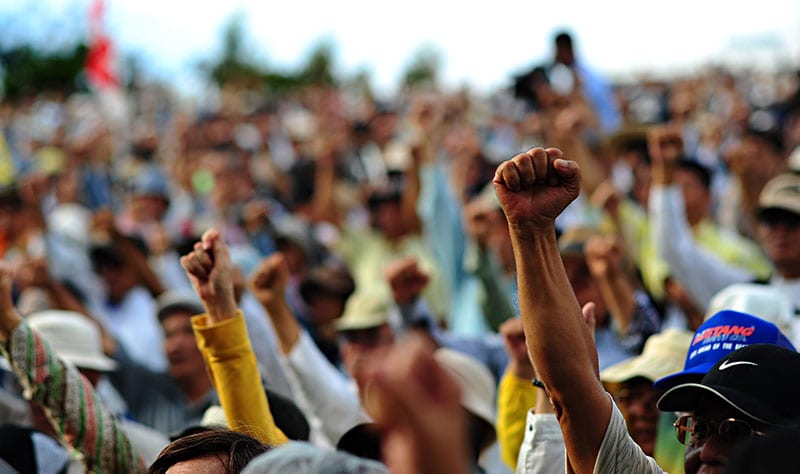 Intended responses to rape as functions of attitudes, attributions of fault, and emotions

We’ve all heard the stories – Brock Turner, Ben Roethlisberger, Bill Cosby. Sexual assault or rape cases covered and picked apart by the media that caused outrage throughout the nation. In response to publicized cases like these, it appears that more and more women are speaking out about these injustices (thank you feminism), including women in college. A generation of strong women with fire in their bellies, ambition to continue to pave the way for equality, and reject the misogynistic, garbage narrative is something that I can get behind. Our responses to rape matter, including both speaking out against rape and showing support for individual survivors of rape. But, we know that there’s a lot of variability in people’s responses. Some people speak out against rape and some people don’t; some people offer social support to survivors of rape and some people don’t. Can we get a more precise idea of why people respond to rape in different ways? How do their attitudes, attributions of fault, and emotions matter in these responses? To answer that question, I turned to Drs. Valerie Earnshaw, Eileen Pitpitan, and Stephenie Chaudoir’s article.

Wait – what do you mean by attitudes, attributions of fault, and emotions?

Attitudes are how a person thinks or feels about a particular subject and, in this study, are participants’ feelings about feminism and beliefs about rape. Feminism and rape myth acceptance likely impacted student responses to rape including likelihood of speaking out and/or taking action.

Attributions to fault are the people, norms, or other things that participants blame for rape and are likely related to how they responded to rape, as well. College students in the U.S. may blame society, the perpetrator, and/or the survivor.

Emotions are feelings that play a role in student responses to rape. The main emotions examined in the study were fear, anger and pity. Feeling fear is a common response to people’s increased awareness of rape culture, whereas feeling anger is a response to realizing someone’s personal freedom and privacy have been invaded. Pity is not felt for rape itself, but for the survivor of rape as his or her physical, psychological, and emotional well-being has been damaged for reasons out of their control.

Got it, so what happened in this study?

This study examined college students’ perceptions of and reactions to a description of a female student’s rape experience. All participants were pre-screened, read a scenario online about a female college student’s rape experience, and answered questions about their reactions, including their attitudes, attributions of fault, and emotions. 105 female and 74 male college students participated. Many of these types of studies are divided by gender, but this one included both males and females simultaneously because in the real world we aren’t awkwardly standing around on opposites sides of the gym like 6th graders at a school dance.

Women held more positive attitudes toward feminism and disagreed more with rape myth acceptance attitudes than men. Women also attributed more blame to society than men did, but women and men attributed similar amounts of fault to the survivor. Women experienced greater fear and anger than men after reading about the scenario, and women and men experienced similar amounts of pity. Women agreed more strongly than men that they would engage in anti-rape action, but women and men agreed that they would help survivors of rape to a similar extent.

Yes, and these are good to keep in mind when thinking about how these results might matter in the real world. There were a few:

The awesome thing about this study is that it’s about rape on college campuses and, as I hope you know, that’s a huge problem. If you haven’t watched The Hunting Ground, go watch it right now. Also, if we can get a stronger understanding of predictors of college students’ desire to help and take action, efforts to stop rape on campus in the long run have a higher likelihood of being improved. Just imagine not feeling weird about walking home alone one day. Crazy, right? Dream big. Peace out. 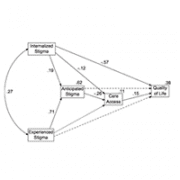 Over half of adults in the United States live with a chronic illness like diabetes or asthma. If you’re one of the lucky few that doesn’t have a chronic illness, odds are you know someone who does. You probably also know that adults with chronic illnesses usually spend a lot of time visiting different doctors and health care facilities trying to manage their symptoms. But what you might not know is that these patients are sometimes stigmatized in healthcare settings. This can have a negative impact on their quality of life. If you felt like your doctor had negative feelings about your illness, how likely would you be to seek treatment? And if you don’t seek treatment, would that harm your quality of life? Well, Valerie Earnshaw and Diane Quinn wanted to study just that: Does stigma in healthcare settings impact people living with a chronic illness? They thought that if a person experiences more stigma, they would be less likely to access healthcare. And as a result, this would lead to worse quality of life.   If we can understand exactly how stigma affects people, we can work towards forming strategies to ensure that people with chronic illness access healthcare and have the best quality of life possible.

Unlike other studies on chronic illness stigma, Earnshaw and Quinn defined three distinct types of stigma and looked to identify which type of stigma had the worst impact on individuals. Internalized stigma occurs when people absorb or “internalize” negative attitudes about their stigmatized attribute. Experienced stigma is pretty self-explanatory: It’s just when someone perceives that they’ve been discriminated against in a healthcare setting. Internalized and experienced stigma could lead to anticipated stigma. That is, if someone has experienced stigma or internalizes stigma, they’ll probably expect this stigma in healthcare settings in the future as well. All three types of stigma may be related to each other and are all connected to care access and quality of life. Earnshaw and Quinn thought that the more someone internalizes stigma about their illness or experiences stigma, the more likely they’d be to think others will do the same in the future. As a result, they would anticipate that they will experience stigma in the future. They also thought that people who anticipate stigma would access less care, and then have a lower quality of life. So, all 3 types of stigma have an impact on care access and quality of life for the chronically ill community.

Earnshaw and Quinn recruited 184 participants through an online survey. The majority of these participants were white/European females who had either asthma, some type of inflammatory bowel disease (like Crohn’s or ulcerative colitis), diabetes, or some type of chronic pain disorder. The participants were then asked some questions about internalized, experienced, and anticipated stigma and whether they’d experienced any of these forms of stigma in healthcare settings. 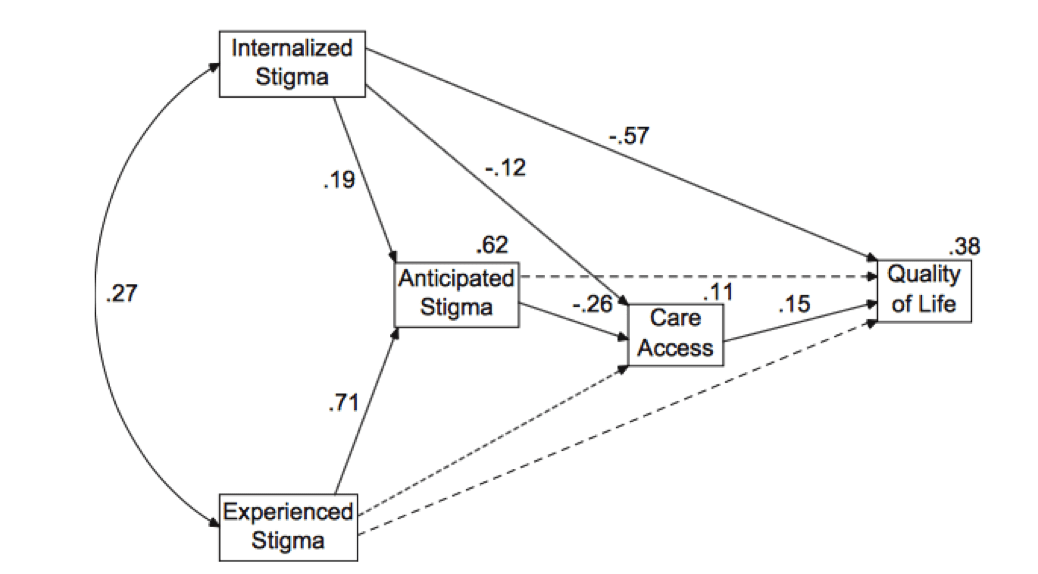 But, there were some limitations to keep in mind. First, this sample doesn’t represent the whole population of people living with chronic illnesses. Most participants were females and in their early 20s. The chronic illnesses they reported didn’t include some of the illnesses more prevalent among older adults such as heart disease and cancer. We need to look at more research to see if Earnshaw and Quinn’s findings are true for the rest of the population.

So why should we care?

Well, chronic illness is on the rise among Americans and over half of adults are currently coping with at least one. This research is really important to help understand what influence stigma has on the quality of life for this population. When these individuals seek out care and experience, anticipate, or internalize stigma about their illness, they may not be comfortable reaching out to get treatment. And without medical care, the symptoms of chronic illness may take a serious toll on their overall quality of life. If we can begin to eliminate stigma in the healthcare setting, we can ensure that living with a chronic illness doesn’t have to mean that someone will live an unsatisfactory life.

What do we do about it?

Earnshaw and Quinn think that early intervention can help to take away the internalized stigma these people deal with and that way, they won’t hesitate to access health care resources and improve their quality of life overall. Providing information and tools to make healthcare workers more aware of the negative impacts of stigma would also be a useful way to ensure that stigma won’t have such negative consequences for people with chronic illnesses. Earnshaw and Quinn think that by encouraging self-efficacy, patients will be more likely to keep up with their healthcare visits. Because the number of people diagnosed with a chronic illness increases everyday, a better understanding of how stigma impacts quality of life is necessary to ensure that the needs of this growing population are served.